War in the Store

The “War in the Store” started 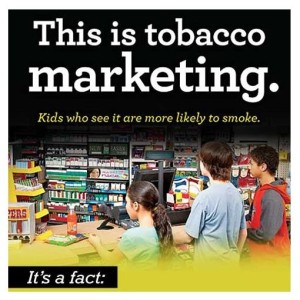 in 1993 when Philip Morris heavily discounted its Marlboro brand, and other tobacco companies followed suit to compete. In 1998, the Master Settlement Agreement put an end to some forms of  tobacco marketing such as getting rid of Joe Camel and other cartoon characters and banning product ads on billboards and magazines. But it left the store environment relatively free of restrictions and that’s when the store became the primary focus of tobacco industry marketing.

Tobacco companies spend more than $9.5 billion on retail marketing and promotion every year, more than the amount spent to market junk food, soda, and alcohol combined. 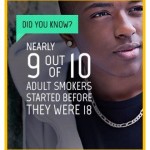 The problem is, tobacco marketing is working to create a new generation of smokers under the age of 26. More than 9 out of 10 adult smokers started before age 18, and 99% before age 26. If young people don’t start using tobacco by age 26, they almost certainly never will. 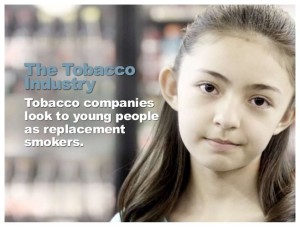 Every year in NYS, 28,200 adults die of smoking-caused diseases. That means that tobacco companies lose 28,200 customers every year that they need to “replace” with new smokers in order to stay profitable. These “replacement smokers” include 10,600 new smokers under the age of 18 every year. Tobacco companies are spending half a million dollars each day in New York to grow that number; we’re spending 1/10th of that amount trying to stop them.

The Four P’s of Tobacco Marketing 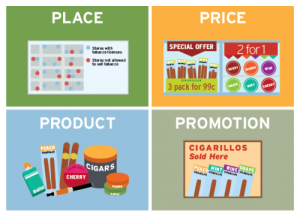 d keep as many current smokers as possible, tobacco companies need to keep their deadly products affordable, accessible and attractive.  Understanding how they do that means taking a closer look at how they manipulate what is known as the 4P’s of marketing: product Price,  the Product itself,  Promotion strategies and Place of sale.

Use the dropdown menu on the “Tobacco Marketing” tab to learn more about  the tobacco industry’s marketing tactics for each of the four P’s.